Ray Scalper V2.0 will trade similar to V1.9 in default-recommended mode. The only change made to the strategy/trade entry is addition of M15 channel support/resistance. In V1.9, H1 channels was introduced to make the EA more dynamic and adapt to changes in price action faster. Version 2.0 has been improved further by being able to provide an additional level of support/Resistance from M15 channel. The effect and advantages of M15 channels are usually seen in very volatile market conditions. The new version can adapt better and much faster than earlier version when we see extended sessions of fast moving/high range price movements. By volatile markets, we do not mean spikes or choppy price action usually seen during new release.

PhiBase had conducted a member feedback survey in March. It was found that the performance of the EA was good on most accounts and broker related differences were seen to be reasonably low. However, we received a large number of suggestions requesting for user control parameters which can be used to adapt the EA as per a traders requirements. Version 2.0 has a large number of control parameters and customization features. Traders who do not wish to run the EA in its default - recommended mode may need to go through the user manual and understand all the parameters. In case you are happy with the trading style of Ray Scalper, you just need to run the EA in its default mode (same as recommended parameters).

Ray Scalper V2.0 shows an overall improvement when compared to the version 1.9. We can see improvement on almost all aspects. The latest version almost has better net gains with same maximum drawdown. The improvement in gains obviously reflects well on the CAGR and average monthly gains as well. Ray Scalper will work similar to V1.9 in the default-recommended mode (4411 and no exit strategy). Major difference would be seen when using the conservative settings which enables the exit strategy. Version 2.0 has many user control parameters which can be used to customize the EA's trading to suit your trading style.

The major changes to strategy are listed below:

With Conservative settings, StopLoss will be moved to first level Support/resistance

Parameter to specify percentage of capital to be used by EA

Few of the suggestions, ideas and feature requests would require changes to the core strategy - This will be taken up by our development team and implemented future updates if the long term effectiveness of the system is not compromised.

Annual gains comparision chart of version V2.0 and version 1.9 is given below. It can be seen that version 2.0 performance is similar or better than v1.9 for most years. V2 underperforms a little when compared to v1.9 in 2000, 2001, 2002 and 2007 - this is due to the addition of the M15 channels - The gains/performance during the earlier years must only be taken for a rough guidance since EURUSD had much lower volumes and very high spreads during these periods. Version2 will be able to handle extended periods of high ranging price movements and very volatile periods much better than v1.9 - while maintaining its profitability in low ranging and flat periods.

Our reference accounts will be run with the default-recommended parameters. We will provide an new demo account to serve as reference account for the conservative parameters which will show the functioning of exit strategy. The FxOpen real account will use hidden TP/SL since its Stop Loss Level is 10 pips - Enabling hidden TP/SL will make this account trade similar to our other accounts.

The validity of backtest is of concern to some members. Ray Scalper does not involve any kind of optimization and the strategy is only tested with historical data to study the EA's performance under a wide range of market conditions. Trades in live accounts should match up reasonably well with the backtest conducted with any high quality data.

All phibase backtests are conducted with Alpari UK M1 data. The data set has now been updated till 5th of april and a study was conducted to compare the validity of the backtest and compare the performance with live forward tests available with us.

We have Ray Scalper live forward test results of one demo account and one real account between September, 2012 to 5th april, 2013. Backtest for the same period was conducted on the Alapri M1 data set used to conduct the 13 year tests. Backtest was also conducted on IC markets Real ECN feed which was obtained for the same period. Live equity charts of FinFX demo and FxOpen real account are also presented below for comparision. 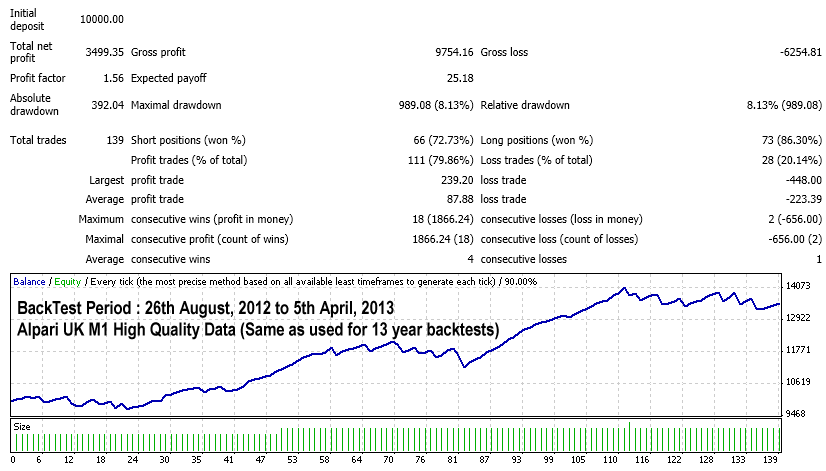 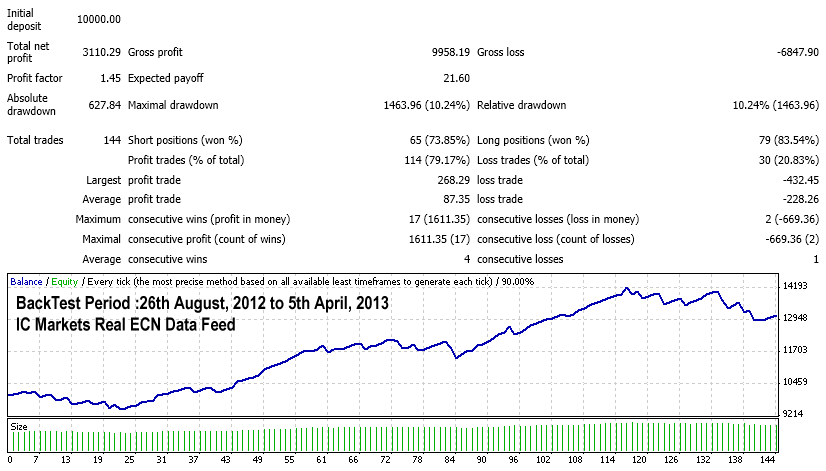 The two backtest results conducted in different dataset are in close agreement. We can safely say that the Ray Scalper can be tested on any high quality data set. Such backtests will be reliable and can be used to understand the EA's trading style, statistical analysis and derive risk levels based on gain/drawdown estimations.

Based on 7 month period (about 125 trades), it can be seen that the live performance is in close agreement with the backtests conducted. Ray Scalper has been performing almost similarly on demo and real accounts. The FxOpen real account was initally operated with V1.0 using parameters 1411. This account was updated to V1.9 and Parameters 4411 was used from Mid January, 2013. The account has a stop level of 10 pips - which means that trailing SL to price gap needs to be atleast 10 pips. Due to this limitation the account had a few trades ending in loss when compared to other accounts. From member performance feedback we see that most accounts recorded gains varying between the two live accounts presented above. Some accounts have out performed the reference accounts. 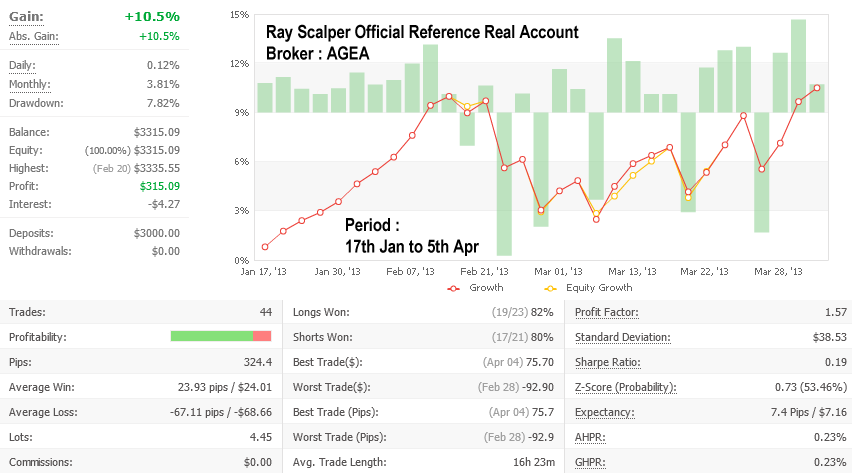 The above reference account was started when Ray Scalper V1.9 was officially released on 17th January, 2013. This account is funded properly and will use max_allocation 8 and provide for proper reference. The account has been updated to Version 2.0 on 6th April, 2013. Alpari US demo was also started to provide reference when V1.9 was released. The MyFxBook links to these reference account are given below:

Pepperstone live accounts are seen to trade similar to other accounts. But these accounts seem to be missing out on some trades and have registered lower gains.

The backtest conducted with Pepperstone Razor account feed for the period between 1st December to 5th April is given below: 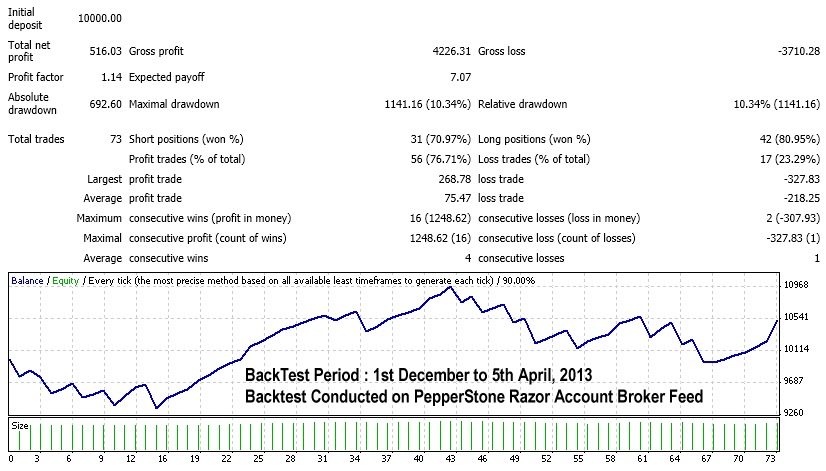 The same period test conducted on IC Markets ECN feed and Alpari M1 data is given below: 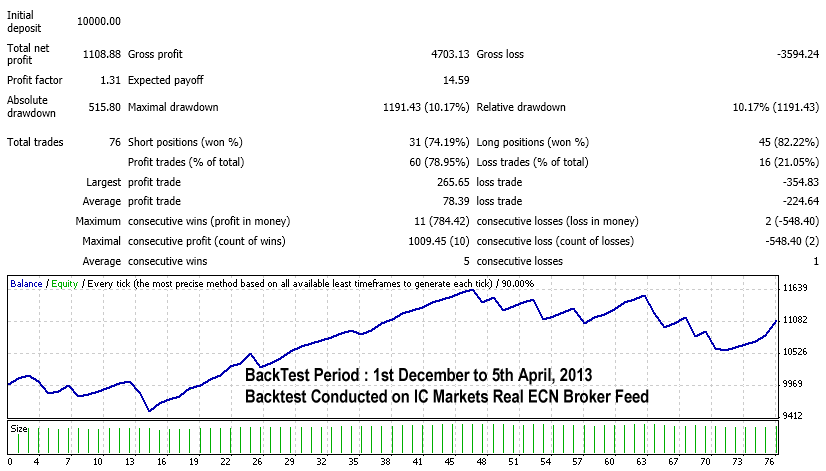 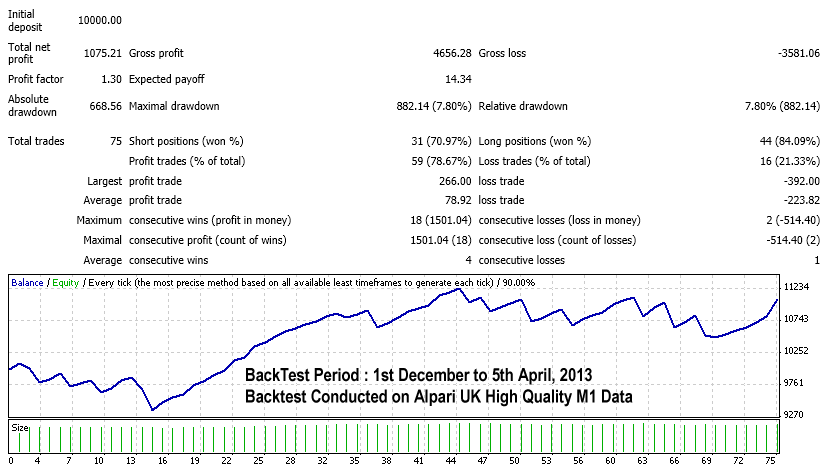 Backtest conducted with pepperstone feed is also in agreement with the underperformace seen in live trading. If you find underperformance on your account, you may consider conducting backtest using the broker feed available on your platform and compare it with your live trade results. It will be useful to collect the broker feed data by exporting it on a monthly basis. This will enable you conduct backtest for longer periods which will be more reliable.

Please consult with our technical support team if you need any assistance or information with regard to performance based on your particular broker.


Forex trading can involve the risk of loss beyond your initial deposit. It is not suitable for all investors and you should make sure you understand the risks involved, seeking independent advice if necessary. Forex accounts typically offer various degrees of leverage and their elevated profit potential is counterbalanced by an equally high level of risk. You should never risk more than you are prepared to lose and you should carefully take into consideration your trading experience. Past performance and simulated results are not necessarily indicative of future performance. All the content on this site represents the sole opinion of the author and does not constitute an express recommendation to purchase any of the products described in its pages.


U.S. Government Required Disclaimer – Trading foreign exchange on margin carries a high level of risk, and may not be suitable for all investors. The high degree of leverage can work against you as well as for you. Before deciding to invest in foreign exchange you should carefully consider your investment objectives, level of experience, and risk appetite. The possibility exists that you could sustain a loss of some or all of your initial investment and therefore you should not invest money that you cannot afford to lose. You should be aware of all the risks associated with foreign exchange trading, and seek advice from an independent financial adviser if you have any doubts. Clearly understand this: Information contained within this course is not an invitation to trade any specific investments. Trading requires risking money in pursuit of future gain. That is your decision. Do not risk any money you cannot afford to lose. This document does not take into account your own individual financial and personal circumstances. It is intended for educational purposes only and NOT as individual investment advice. Do not act on this without advice from your investment professional, who will verify what is suitable for your particular needs & circumstances. Failure to seek detailed professional personally tailored advice prior to acting could lead to you acting contrary to your own best interests & could lead to losses of capital.


*CFTC RULE 4.41 – HYPOTHETICAL OR SIMULATED PERFORMANCE RESULTS HAVE CERTAIN LIMITATIONS. UNLIKE AN ACTUAL PERFORMANCE RECORD, SIMULATED RESULTS DO NOT REPRESENT ACTUAL TRADING. ALSO, SINCE THE TRADES HAVE NOT BEEN EXECUTED, THE RESULTS MAY HAVE UNDER-OR-OVER COMPENSATED FOR THE IMPACT, IF ANY, OF CERTAIN MARKET FACTORS, SUCH AS LACK OF LIQUIDITY. SIMULATED TRADING PROGRAMS IN GENERAL ARE ALSO SUBJECT TO THE FACT THAT THEY ARE DESIGNED WITH THE BENEFIT OF HINDSIGHT. NO REPRESENTATION IS BEING MADE THAT ANY ACCOUNT WILL OR IS LIKELY TO ACHIEVE PROFIT OR LOSSES SIMILAR TO THOSE SHOWN.


By using PhiBase SYNERGY, you acknowledge that you are familiar with these risks and that you are solely responsible for the outcomes of your decisions. We accept no liability whatsoever for any direct or consequential loss arising from the use of this product. It's to be noted carefully in this respect, that past results are not necessarily indicative of future performance.